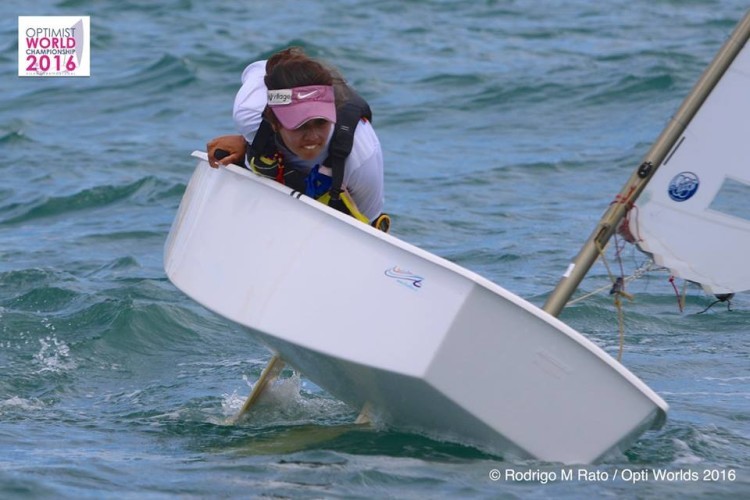 Beatriz Gago (Clube Naval de Portimão) won the 2nd Test Event for the Optimist World Championship 2016 in Vilamoura. The fleet test ended today, Sunday, April 17, and the podium was filled by sailors from the Algarve. “In this second test event we tested security procedures and the relation between the size of the fields and the official times for the regattas. The test also allowed the young Portuguese sailors to train at the place where the World Championship will be held”, said an official source of the organization, to the Swell-Algarve.

The Optimist World Championship 2016 will take place in Vilamoura, from 25 June to 4 July. It is one of the biggest sailing events in the international calendar. The CIMAV – Clube Internacional da Marina de Vilamoura is preparing the OptiWorlds carefully and has scheduled three test events before the main event. The first was the 42nd International Carnival Tournament in February, which brought together 400 sailors of various sailing classes, and has tested the necessary logistics for a big size championship.

The 2nd Test Event began last Friday and was supposed to last until Tuesday, but ended today. The event should include the Portugal Team Racing Optimist Championship, which “did not happen”, said a source of the organization. Thus, the test was only a fleet race, which took place over three days, until today with full compliance of the three days program.

The first three places on the podium were occupied by sailors from the Algarve: Beatriz Gago (CNPortimão) 1st; Guilherme Cavaco (GCNFaro) 2nd; and William Risselin (GCNFaro) 3rd. A result that opens up good prospects for the Algarve in Vilamoura’s Optimist World Championship, because this test event was also attended by high level sailors from the Clube de Vela do Barreiro.

“I enjoyed the races with the Spanish and the Portuguese sailors who were here. It went well. I was able to better understand how the various types of wind works here in Vilamoura”, said Beatriz Gago, twice Portugal Youth Women Champions (2015 and 2016).

The 3rd Test Event is scheduled for the 16th to June 19th, very near the Optimist World Championship 2016.