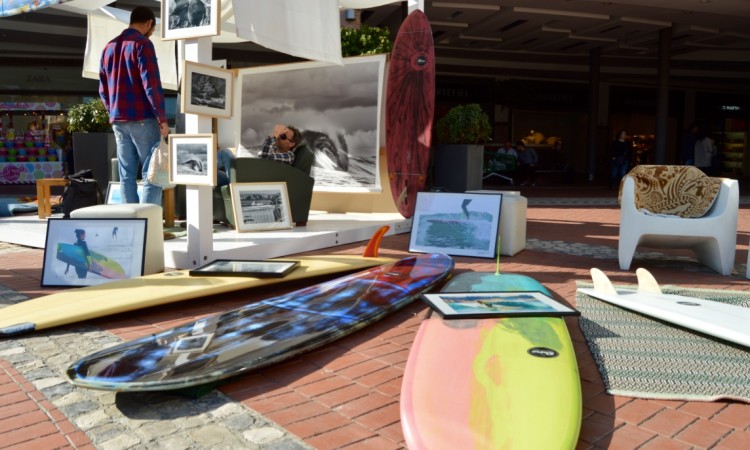 The ‘Clube de Surf de Faro’ organized the third edition of ‘Surf Arte Show’ at the mall Forum Algarve on Saturday, April 9th. A day dedicated to the surf culture at the Algarve’s capital city, with ‘indoor’ surf lessons, film screenings, music concerts, old surfboard exhibitions, conversations with ‘shapers’ and a public debate on surf photography, with the participation of photographers of the new and the old school.

The ‘Surf Arte Show’ is an initiative intended to demonstrate the link between the worlds of surfing and art. It’s a cultural event that promotes the Surf Culture in the city. Surfing is more than competition, more than a beach fashion or trendy clothing. It is an activity that promotes the well being of the body and the mind. It is a lifestyle, becoming one with nature. 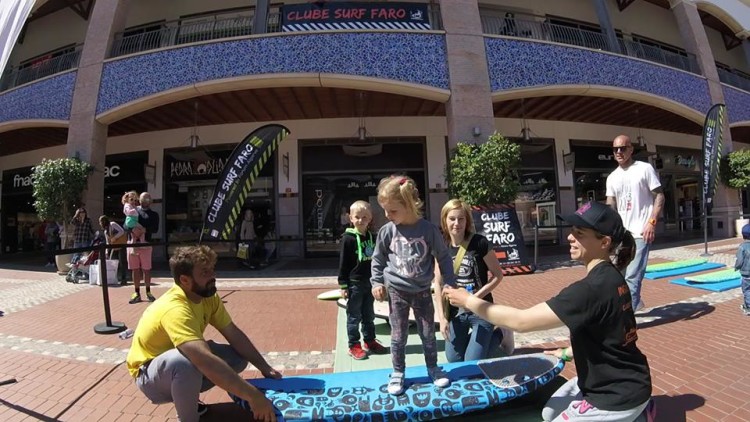 The ‘indoor’ surf lessons, open to the public at the lobby of the Forum Algarve, demonstrated well the physical skills needed to do functional surfing training. The films showed the beauty and harmony between man and nature, between surfer and water. The duo, from Faro Beach, “Wax Flamingos” played a concert, where rock & blues inspired by the sea took on the Fnac stage.

Throughout the day, in the Forum lobby, a collection of old surfboards, and the work of three ‘shapers’ that are great examples of surf culture, was displayed,  for all the visitors who wanted to enjoy and exchange ideas. 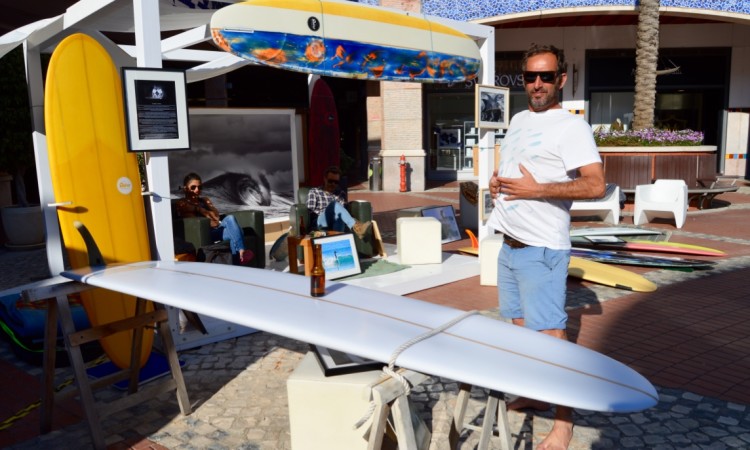 Dan Costa, shaper of the brand “Retro Movement”, is a nonconformist and perfectionist. The ‘Shaper’ presented in his show a classic ‘nose-rider’ 9.4 feet longboard, with a double ‘stringer’ (two axes) and a beautiful visual effect caused by the pigmentation. These are  expensive boards; this particular model is selling for € 1,150, but the perfection and functionality of its lines are compelling.

Daniel – his real name – also presented to the public his personal board, Dan’s Nose Rider 9,3 longboard. It is aesthetic simple and minimalist. It’s all white. But the secret is in the design details. “It is a proposal for the future; with a turning capacity exceeding the classic longboard, “said Dan Costa. 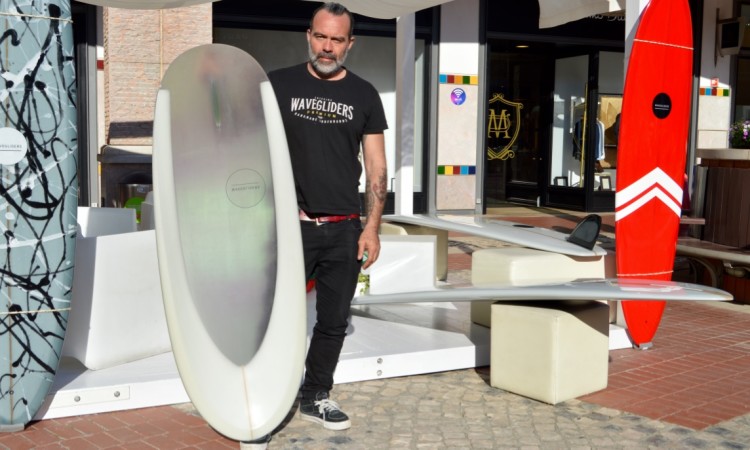 Domingos Carvalho, ‘shaper’ Nico of the brand Wavegliders, Ericeira, included in his display a “spoon” board … a board-shaped like a spoon. “There are only two in Portugal and this one was done by me”, said ‘Nico’, an aficionado of the history of  ‘shape’ who produces modern surfboards using principles of classical models. “The ‘spoon’ model is only made by 4 ‘shapers’ worldwide. They are expensive (around 2.000 euros), therefore not as popular”.

The ‘spoon’ surfboards are used to surf on your knees and they carve beautifully and turn very quickly. But above all, they have feature design principles that preceed the ‘top -to-bottom’ surfing from the 60s; ie: functional lines that launched the ‘shortboard’ revolution (a time in which surf was dominated by long boards). ‘Nico’ explained all this and presented other historical references on the progression in surfboard building, very present in your work. 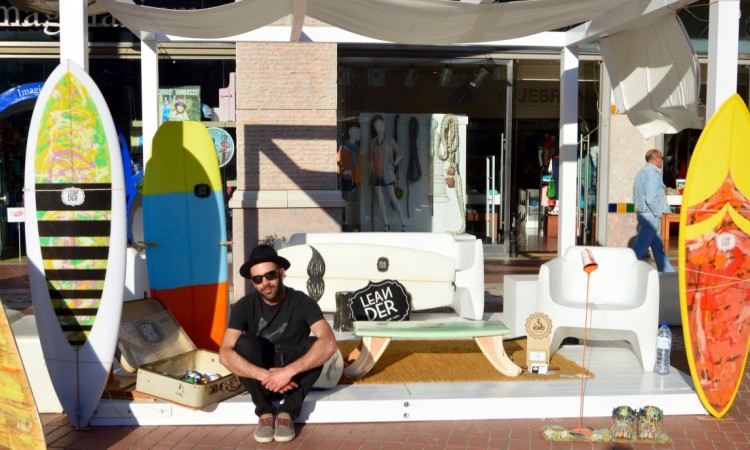 ‘Shaper’ Leandro Simões from the Algarve presented his ‘Retro’ work, by which his brand ‘Leander Wave Riding HandShapes’ is known for. A craftsman from Carvoeiro, himself being an experimentalist and investigator of the ‘shapping’ from the past, making his ‘Mini Simons’ a reputable board.  In addition to some ‘Mini Simons’ models and a ‘Teardrop Single Fin’ for fast surfing and tubes, Leandro presented an Asymmetrical surfboard designed to rights handed waves.

“I think no one has a similar one in Portugal”, said the ‘shaper’. It’s  a surfboard with asymmetrical strange lines, it has a ‘pin tail’ on the righthand side, a large ‘keel fin’ on the same side; and half a ‘set quad’ (2 small fins) on the opposite side- but it works very well on the right handed waves, for which it was designed.

Those who had the opportunity to see the work and talk to the three ‘Shapers’ at Forum Algarve, were able to learn more about surfboards performance and the true passion of these craftsmen, which is an example of the artistic dimension of the surf culture. 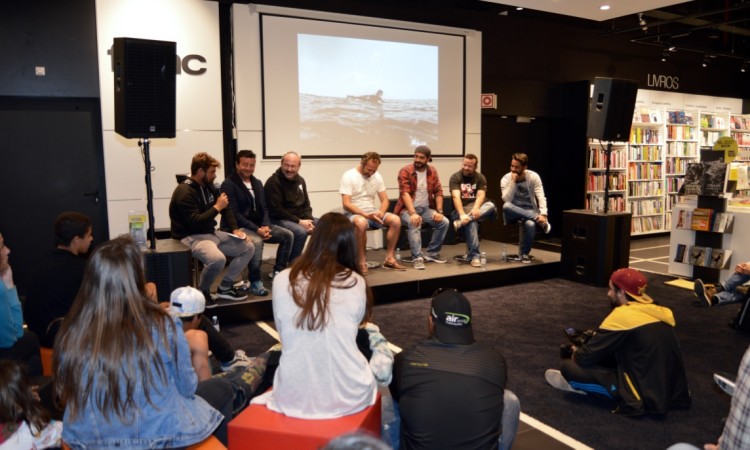 The ‘Surf Arte Show’ 2016 ended with a forum entitled ‘The Surf Photography ‘. The participants included, the three ‘shapers’, the director of Swell-Algarve, Paulo Marcelino ; the director of ETIC-Algarve and former surf photographer, Nuno Ribeiro; the internationally renowned photographer João ‘Brek’ Bracourt; and the young and promising photographers João Leopoldo, from Portimão; and Nuno Neves (Ganso) and Luís Gamito, from Faro. The forum was moderated by the President of the ‘Clube de Surf de Faro’, Manuel ‘Necas’ Mestre, one of the pioneers of surfing in the Algarve with many stories to tell.

During an hour and a half, the panel, ‘shapers’ and public, debated various issues related to surf  photography, in the Fnac store of the Forum Algarve. One of the questions raised was about the future of surfing in context with the crowd on the water and digital technology. It became evident to all present that the future has to be in line with the past, that the evolution of surfing will always have a strong relationship with the cultural and technical  principles which marked the stages of its history. In that sense, the ‘Surf Arte Show’ has and will continue to make its important contribution towards a more consistent future in the waves.