Joana Schenker Is on a Winning Streak 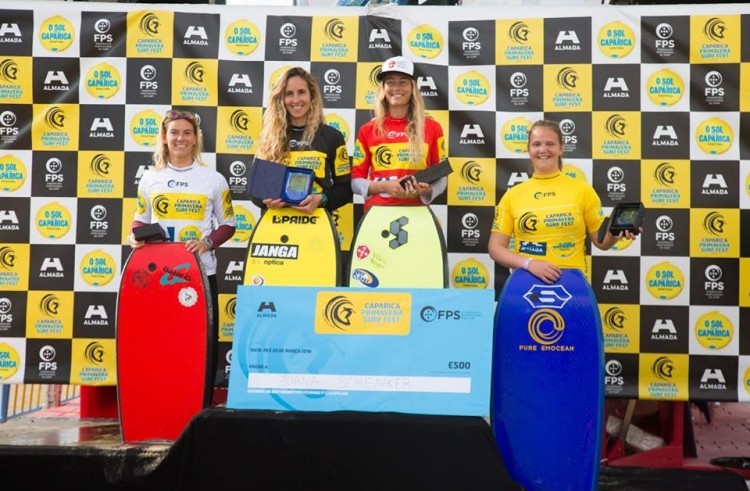 Joana Schenker with the red jersey at the women's podium in Caparica. The bodyboarder from the Algarve is the Portuguese and European Champion (®DR)

Joana Schenker has not lost a single heat this season. The athlete from the Algarve, representing the ‘Associação the Bodyboard de Sagres’ (ABS) has won the Women’s Open in Event 2 of the Portuguese Tour of Bodyboard – Circuito Nacional de Bodyboard Open 2016 – held yesterday, March 20, at Costa de Caparica. Portuguese and European champion, Joana repeated her result in last year’s Caparica national tour event and secured her second consecutive CNBBO 2016 victory.

The bodyboarder from the Algarve is preparing to enter this year’s World Tour and has had flawless performances on the Portuguese Tour. Joana Schenker repeated at Event 2 the all out winning performance she had at Event 1 (the previous week, at Figueira da Foz): she has won all her heats and always with good (6 to 7 points rides) and excellent (8 to 9 points) waves.

Sea conditions at Costa de Caparica were not easy, with multiple and unpredictable breaks, making it difficult the task of finding the right place to catch the good rare waves. Her coach and boyfriend, Francisco Pinheiro (a veteran Portuguese bodyboarder still in action), gave no indications from the beach, strengthening the autonomy of Joana already thinking about the World Tour. Joana Schenker overcame the challenge with a strong performance and good use of priority. “I’m super happy with this second consecutive win in the National Bodyboarding Tour”, said the athlete.

The ‘Associação de Bodyboard de Sagres’ competed in Costa de Caparica also with two male athletes – Francisco Pinheiro and Gonçalo Pinheiro. The two ‘riders’ from the Algarve entered the same ‘heat’ in the Open Round of 48 and moved on; Francisco 1st and Gonçalo 2nd. In the next round (quarter-finals) both bodyboarders lost in 3rd on their heats, finishing 17º.

“My waves did not matched those of my opponents”, said Francisco Pinheiro, to the Swell-Algarve. The charismatic ‘bodyboarder’ from Sagres (Algarve) is more accustomed to the powerful left handlers from ‘his backyard’ than to Caparica’s rights.

Ricardo Rosmaninho won with surprise the Open at Caparica, over the nine times Portuguese champion Manuel Centeno. ‘Super’ Pedro Fernandes also was at the Open (Male) final, after eliminating the Portuguese champion, Hugo Pinheiro, in the semi-finals. Nuno Leitão, ‘Batata’, was the winner in the Dropknee disciplin. The event also included a Tow Out display with Edmundo Veiga towing some ‘riders’ to the outside and into the waves for an aerials show.

The Portuguese Tour of Bodyboard will be paused until August. Event 3 of the Women’s Open will be held separately, scheduled for August 19 at Ílhavo (Aveiro). Men’s Open and Dropknee Event 3 is scheduled for the 27th and 28th August in Ericeira.